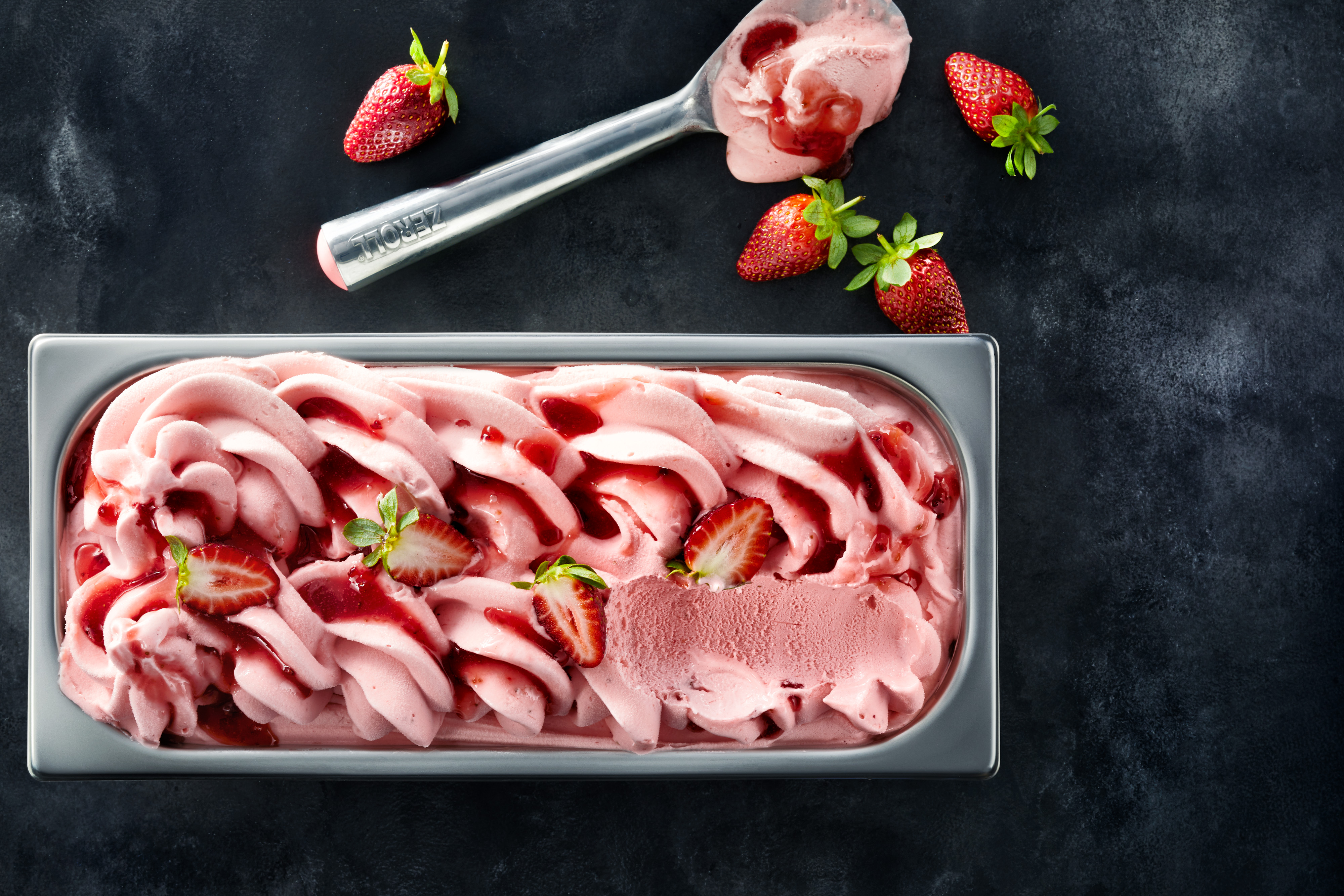 Hottest trends from the Gelato World Cup in Italy

Held every 2 years, the Gelato World Cup (GWC) showcases the amazing creativity and skills of gelato and pastry chefs from around the world. We sent our resident ice cream guru, Alan Thomas, over to Italy to see what it was all about.

This year, the teams headed to Rimini in Italy to compete, so there was bound to be lots of excitement (not to mention a fair bit of drooling) over the fabulous creations being made.

The selection process for the teams started 16 months ago at competitions held world wide, with the final teams being selected by the committee of the Coppa del Mondo della Gelateria. Judging the competition is very serious business with 12 technical judges watching over the competition, as well as a press jury of 10 international journalists and an artistic jury of 4 people.

Our very own Gelato Willy Wonka, Alan Thomas, headed over to Italy to check out the event.

ALAN, YOU'VE JUST RETURNED FROM THE GWC - WHAT EXACTLY WERE THE PARTICIPANTS DOING?
The competition shows off the talents of the teams involved and highlights their skills in making gelato, desserts and pastries. Each day the teams would prepare the gelato to be presented to the independent judges for blind tasting. There were different categories such as decorated tray, ice sculptures, single portion in glasses, gelato snacks and gelato cakes plus of course, the final showstopping dessert.

It was a bit like going to a soccer game - highly excitable crowds with banners, flags, lots of yelling and screaming for the teams competing. Just amazing!

HOW MANY TEAMS WERE INVOLVED?
There were 11 teams competing and each team had a theme. For example, Italy’s was the secret of the forest, Argentina’s was pirates of the Caribbean and Japan’s was flower of music. Lots of colour and excitement!

IT WAS THE FIRST TIME THAT FRANCE AND ITALY WERE COMPETING ON THE SAME STAGE, AS THEY USUALLY ALTERNATE AT EACH CUP - HOW WAS THAT TO WATCH?
Yes, they were both there  this time around, but to be honest, the competition was pretty fierce between all countries.

WHAT INTERESTING FLAVOUR TRENDS DID YOU SEE OVERSEAS THAT AUSSIE CUSTOMERS SHOULD TAKE NOTE OF?
I did notice a lot more gelato with inclusions in it - things like chocolate, nuts, fruits. Traditionally, Italian gelato doesn't contain any inclusions, but this year the they've picked up on what's happening overseas and have starting putting inclusions in their gelato too.

Interestingly, I also saw manufacturers using soft, flavoured fudges moulded into shapes which are placed on top of the gelato. When you scoop into the gelato, you get a delicious hit of fudge through your scoop. The fudge also protects the gelato while it's sitting in the cabinet as the air flow can’t dry the product out.

Real fruit was another trend that was really popular at the GWC. Instead of using fruit flavours to make gelato, manufacturers were using real fruit purees to enhance the fresh flavour profile. It's exactly the same way we make our Everest Artisan gelato - nice to know we're ahead ahead of the curve! Some manufacturers used the fruit sorbet to mould into icy poles which look amazing when they’re presented in the cabinets standing up. 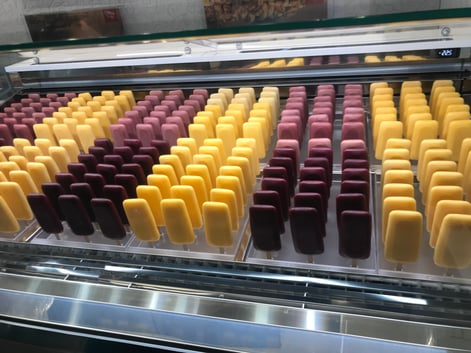 As for health trends, I noticed that non dairy, no added sugar and vegan options were really big at the show - and delicious too! Strangely enough, natural colours and flavours don’t seem to be a huge focus overseas compared to what's trending here in Australia.

ANY OTHER INTERESTING TRENDS YOU NOTICED FROM OTHER SUPPLIERS?
One of the new packaging trends I saw is was the use of clear gelato tubs. Instead of silver or black plastic tubs, manufacturers are using clear tubs and clear freezers to highlight the delicious ripples and inclusions throughout the product. The front of the freezers are all glass so you can see through to the product too - it's quite an impressive look. 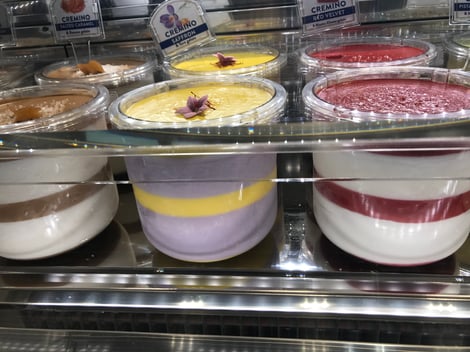 The new dessert trend is small portion gelato desserts, cakes, either glazed or unglazed, and they also had lots of semi freddo type desserts. The cakes get made in a log form and supplied to restaurants who can then cut them into portions and dress the dessert themselves. 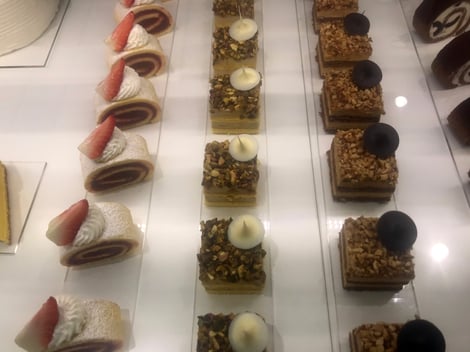 DID YOU MANAGE TO DO A BIT OF SIGHTSEEING WHILE YOU WERE THERE?
Rimini is a beach town, but it was winter, so no one was using the beaches at all. I traveled to Milan, Lake Como and then across to Venice where I visited an ice cream manufacturer based there. They were quite different to Everest with a lot more automation during the manufacturing process while we still hand make so many of our products.

DID YOU MEET ANYONE FAMOUS WHILE YOU WERE THERE?
No, unfortunately there were no Clooney sightings in Lake Como.

DO YOU THINK THERE'S A HUGE DIFFERENCE BETWEEN THE GELATO YOU TASTED IN ITALY COMPARED TO WHAT WE HAVE HERE IN AUSTRALIA?
Not a massive difference at all really. We have some great gelato over here in Australia and at Everest we make them using the pastes that are used in Italy too. The main difference is that when you're tasting it at the show, it's fresh off the churn which always tastes amazing, just as it does when we make it at Everest. The presentation is really important over here - everyone made an extra effort in their presentation for the competition of course, but generally the gelato in the stores over in Italy are dressed in a similar way as our Everest Artisan gelato. We all eat first with our eyes of course. 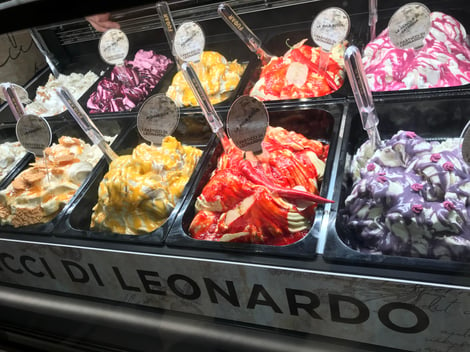 ANY FUNNY STORIES YOU’D LIKE TO SHARE WITH US?
Lots but I probably shouldn't! I had such an amazing experience though. I met so many friendly people and Italy was just a beautiful place to visit.